Mark Terrano cut his teeth as a game designer on real-time strategy (RTS) titles such as Age of Empires II. Now at Hidden Path Entertainment, he is using that experience to take RTS games into virtual reality.

The game has a tabletop metaphor for the VR experience. You build a fortress and an army in VR using your hands to trigger unit building. Then you set those units loose to capture territory on the map and go into battle with the enemy. The game has intuitive controls for rounding up multiple units and setting them loose to attack the enemy, but you can’t see everything from a bird’s-eye view. Rather, you have a line of sight in the 3D space, and you have to move around to make sure that enemy units aren’t sneaking up on you.

Terrano said that the team had to balance the complexity of controlling lots of units with the need to make things simpler than a PC game for the VR player. But he thinks it’s worth it because the sense of immersion you get makes you feel like you are in the middle of a giant tabletop diorama.

Here’s an edited transcript of our interview.

GamesBeat: This is your first VR title?

GamesBeat: What led you to focus on making a real-time strategy game with Brass Tactics?

Terrano: My roots are in strategy. I was lead designer on Age of Empires II. I saw the opening to the Game of Thrones TV show, that cool clockwork thing, and it made me really want to play Age of Empires in that kind of world. That was pretty much the pitch to Oculus. They thought that sounded really cool, and so we made it.

GamesBeat: How long ago did you start?

Terrano: It’s been 14 months in development so far. We’ll be out in October. It’s exclusive to Oculus. They’ve fully funded it. They had enough confidence in a longform project. They wanted to invest in a quality title that people could play for a long time. That was the focus – something you could enjoy over and over again.

GamesBeat: The level that I just played, where was that in the campaign?

Terrano: You probably played the tutorial first. There’s a five-mission campaign. That tutorial is a smaller version of what will be the first mission. Some of them are a bit more puzzle-ey. But we have an unfolding story where you play against different characters. Those same characters are the AI personalities you play on the skirmish map as well.

GamesBeat: Some things seem simpler than usual. The number of units is small, fairly manageable. But in other ways it’s more complex.

Terrano: We tried to keep a lot of decision-making variety. A big-budget PC RTS has a lot more units. But we wanted to maintain unit diversity. The combinations are stronger in some ways. Keeping the gameplay into a 25-minute format was also important. That made for some changes. There’s an economy, and you can attack your opponent’s economy, but you don’t have to heavily manage the economy or decide resource placement. If you take a region, you automatically gather its resources for your economy. A lot of the changes were to support a 20-25 minute RTS. 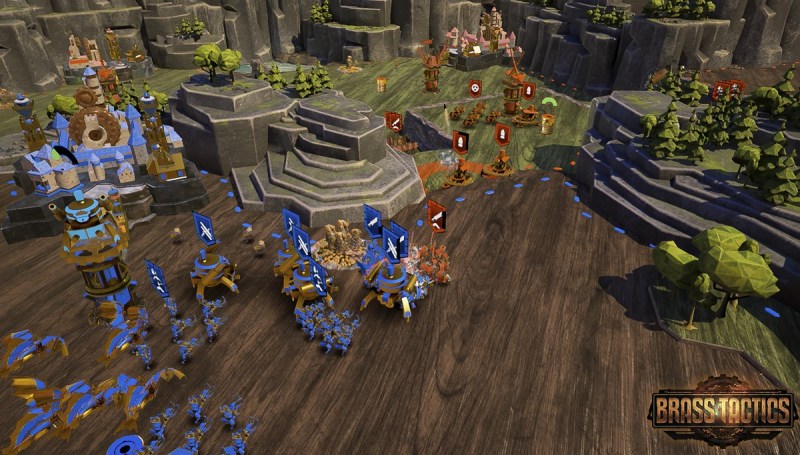 Above: Hidden Path’s Brass Tactics lets you navigate through forests and mountains.

GamesBeat: Did you decide on that target because it felt right for VR?

Terrano: It felt like that was what people were comfortable with. Playing for an hour is a much more intense experience in VR. We wanted people to have the option to play again and again, and 20-25 minutes seemed to be about right. I could still do the full Age of Empires experience with expansion and buildup. The keep has three upgrades with different abilities at each stage. It has the same three-act structure, just with shorter acts.

GamesBeat: Is it going to be multiplayer as well?

Terrano: We have both co-op and versus and multiplayer, and you can also play single-player against the AI.

GamesBeat: On the map that I played, what size is that, relatively?

Terrano: The tutorial is about a quarter of the size of a full-size map. The second map, in the forest, was about the size of a regular level. We have 15 different maps across three different biomes. The desert has a different resource mix and more flat space. The forest has more obscured lines of sight, things like that. And then there’s an ice terrain as well.

GamesBeat: So what you’re able to see from a given vantage point matters?

Terrano: Right. Because there’s no fog of war, we designed obstructions in the maps. You have to go over and look at some things. Some maps have weather, mists, that obscures the lowland areas. You can’t see when units go in, or you’ll be a bit surprised when they come out.

GamesBeat: I was focused on sending my troops up one path to the enemy keep, and then I looked over and saw a bunch of soldiers coming at me.

Terrano: People don’t understand at first how it’s going to work when there’s no fog of war. Then they realize, “Oh, there’s fog of attention.” You can’t look everywhere at once.

Terrano: Not really? We wanted a classic RTS experience in VR. The tabletop is just a good way to tell that story. We like the natural materials, the sense of a constructed space. But the focus was on making RTS a credible genre in VR.

GamesBeat: If you can practice for a while, why might you want to do this in VR as opposed to playing RTS on PC? What does VR add?

Terrano: Emotionally it’s a very different experience. It feels like you’re in there commanding those forces. You have a different relationship with the units. After working on flat screen RTS for so many years, this feels really different. We got a taste of that when we did Defense Grid, but I really wanted to have armies. When you get that epic feel as you’re commanding—you just look around and see the biggest diorama battle you’ve ever had.

GamesBeat: Can you move around quickly, like you’re moving around a mini-map?

Terrano: There is no teleporting movement, but I can flick my wrist and in less than a second I’ll be almost anywhere on the map. 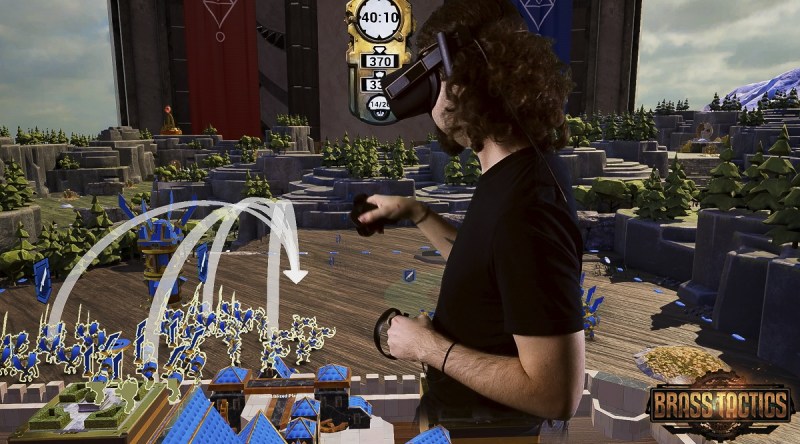 GamesBeat: Are you still pulling yourself over to another place, then?

Terrano: Right. A lot of the gameplay is built around having to be physically present. It’s a lot of fun when you’re playing in multiplayer and you can see your opponent. They’re over doing something, so you wonder what’s going on over there. Then you have to go and look and fight. You find out that you’ve built a tower right next to your keep, and that’s cause for alarm.

Watching your opponent, in a poker-like way, becomes a big part of it. You look at their keep and see what they’ve upgraded. You look at what towers they’ve built. You can get an idea of what’s coming.

GamesBeat: The way you marshal the whole army, do you need to just pass over them to collect them into a group?

Terrano: You can paint and sweep up a bunch of them. You can half-pull the trigger and select individual units. You can also give commands with the thumbstick. For more advanced players, you can tell them to hold by pulling down, or you can order an attack move by pushing up. They’ll attack targets on the way to wherever you’re sending them.

GamesBeat: What variety did you put into those five different campaign missions?

Terrano: We have a lot of different topology, so it rewards different kinds of strategic and tactical play. Some maps have overhangs, so they really favor ranged units and commanding the high ground. How we play with height, how we play with accessibility—some maps have destructible walls. Am I vulnerable while I’m knocking down this wall to get faster access to another part of the map, to the enemy keep? There’s quite a bit of variety across the 15 maps. It rewards different strategies and mixes of units.

GamesBeat: It seems like you need another set of eyes on the field to help you. Can you do that with spectators?

Terrano: We don’t have a firm spectator plan. I would love to be able to support Twitch with a spectator camera. We’ve put a mixed reality camera in, just to make videos, and I hope we’ll have the resources to release that for streamers and broadcasters. As far as a second set of eyes, we do have co-op play. You can play with a friend and it’s great for mixed teams. The co-op map has a catapult in it. If one player is a real RTS novice, the more experienced player can go do their thing and the rookie can shoot the catapult, or just make Wasps and handle the aerial game.

GamesBeat: Is it easier to set up ambushes that way?

Terrano: It’s a little hard to do ambushes with no fog of war. But I do like to tuck units in next to the cliffs, so if people come around while they’re not paying attention they’ll get hit.

GamesBeat: The system within the keep—if you’re putting things in the town, that improves what comes out of your training loop, basically?

Terrano: The keep upgrades are the tech tree. You only get eight strategic choices with the tech tree, so those are very important. They’re big game-changing moves – what units you upgrade, whether you’re countering the enemy strategy or making them chase you defensively. That all changes what you pick. There’s also an economic strategy. You can go for a late game build, if you’re going for elites, or there’s a super unit called a Titan. Once you have one of those on the field, it’s a real challenge for your opponent to stop it. It’s a finisher. It’ll knock down a whole squad of archers in one hit. 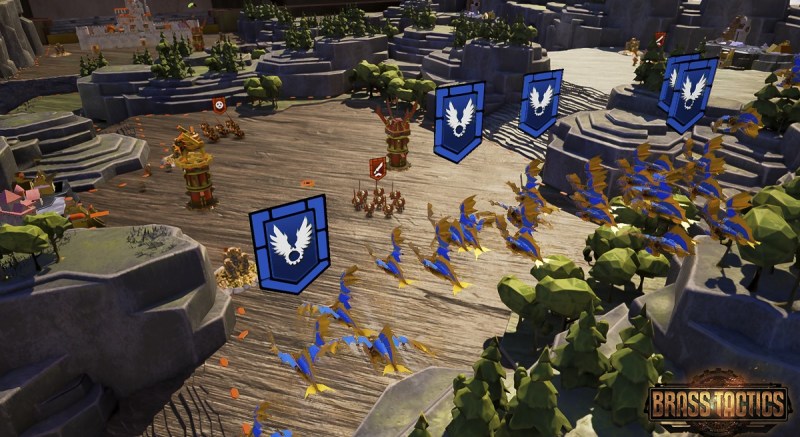 Above: Flying units on the attack in Brass Tactics.

GamesBeat: How many units can you get on the field at once?

Terrano: We’re not fixed as far as our final population cap. We’re at about 100 right now, 10 squads of 10. I hope it’ll be a bit higher than that. We’re playing around with 12 right now. Performance is a really tricky thing in VR.

GamesBeat: And resources are automatically tied to a territory?

Terrano: Right. You take it over and they just pop out. One of the favorite tactics, if you have Wasps, the flying unit, is to economically harass your opponent. When you knock out those workers it takes a while for them to respawn. You can suppress someone’s economy just like you would in a PC RTS with a villager attack.

GamesBeat: Is this a pure fantasy setting, or do you have some sci-fi in there as well?

Terrano: It’s fantasy. I categorize it as an alternate world where we made it to the digital age by just constantly advancing mechanical and materials technology. Everyone has most of the same comforts and conveniences, so it feels like advanced technology, but it’s an alternate world. So I consider it a fantasy. It’s a brand new IP.

This post by Dean Takahashi originally appeared on VentureBeat.