Pretty soon, real life will be stranger than fiction when it comes to bringing the great inventions of science fiction and games into technology.

They dwelled on the future of virtual reality experiences and building worlds like the metaverse in Neal Stephenson’s 1992 sci-fi novel Snow Crash. Given the advances of VR, it’s not such a crazy talk to have anymore. People are really looking for an experience that lives up to the imagination portrayed in such early works of fiction.

“Snow Crash imprinted [the idea of virtual life] on the culture,” Grossman said.

Pallister added, “It feels like the current set of hardware has tipped us over a point where people can feel a magical experience but it is really only just the beginning of the types of experiences depicted in those fictional works.”

Pallister leads Intel’s virtual reality (VR) project lab in Hillsboro, Oregon. His team is working to improve the state of VR technology and to bring VR to mainstream audiences. In his current role, Pallister forecasts the progress of VR and the ingredient technologies responsible for driving VR experiences.

Prior to rejoining Intel in 2007, Pallister worked on Microsoft’s business development team conducting deals for MS Casual Games services, including MSN Games, Xbox Live Arcade and Windows Live Messenger. From 1998 to 2005, he served as games technical strategist at Intel.

Grossman straddles the lines between books and games, as he is both a novelist and game designer. 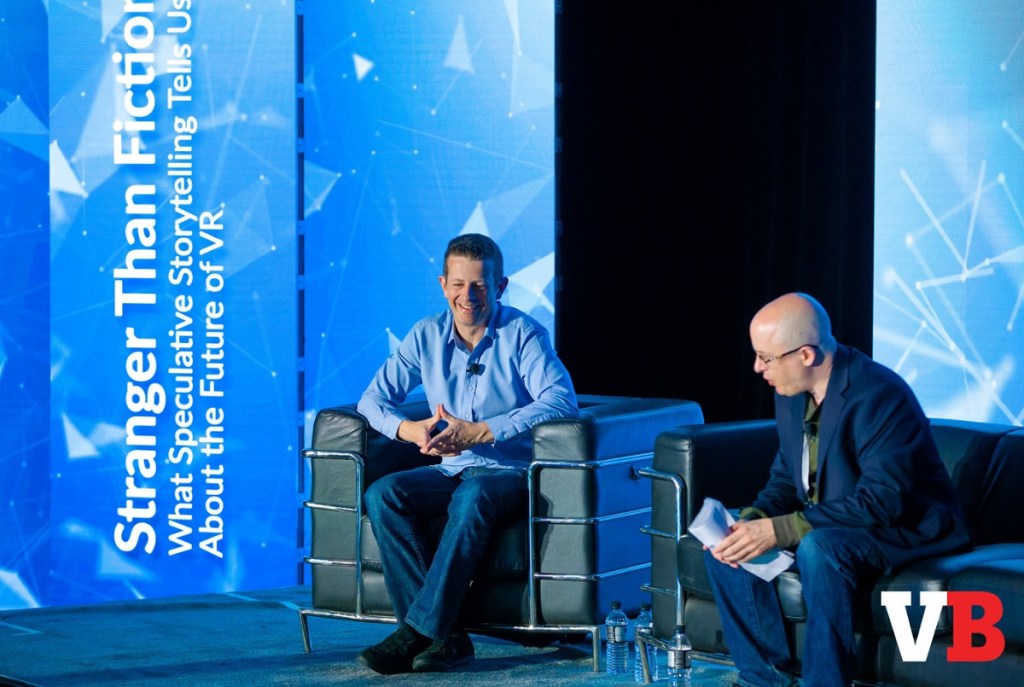 Above: Kim Pallister of Intel talks with Austin Grossman (right) about the future of virtual reality. Image Credit: Michael O’Donnell/VentureBeat

“It’s discouraging if the thing that VR gives us is an escape from a dystopia rather than tool to better ourselves or better the world,” Pallister said.

That was part of the premise behind the world of Ready Player One, the novel by Ernest Cline that is being turned into a sci-fi movie by Steven Spielberg, Grossman said.

In the future, Grossman wants to be able to get all of the senses and sensations in VR so that he can learn how to dance in VR, and then come out into the real world and know how to dance in real life.

Pallister, by contrast, wants to learn how to juggle in VR.

This post by Dean Takahashi originally appeared on VentureBeat.